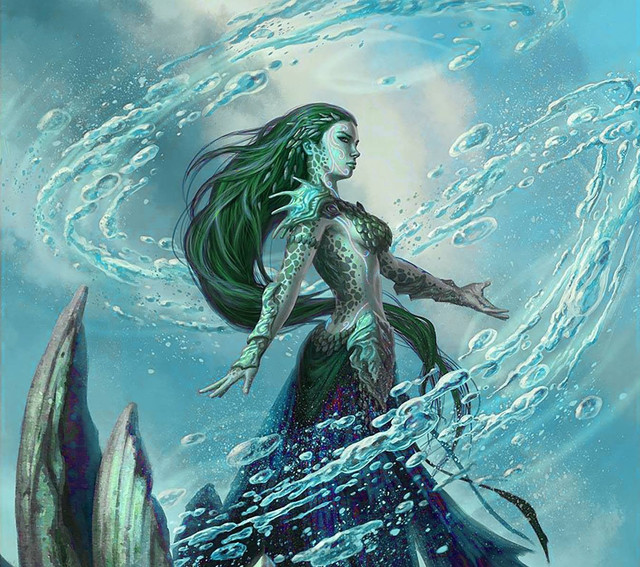 Character Name: Whesyn - Wes - Dehnunath
Race: Triton
Pronouns She/Her
Age: 137
Height: (in feet or cm, or both) 5'1 or 155cm
Size: Medium
Speed: 30ft and 30ft swim speed
Background: Sailor
Backstory: Came from a family that was in friendly terms with the near-by fishing village. But Wes wanted to be more than just a 'fishermen friend', so she set her 2 feet on land and went exploring.

Racial features
Ability Score Increase. Your Strength, Constitution, and Charisma scores each increase by 1.
Amphibious. You can breathe air and water.
Control Air and Water. A child of the sea, you can call on the magic of elemental air and water. You can cast Fog Cloud with this trait. Starting at 3rd level, you can cast Gust of Wind with it, and starting at 5th level, you can also cast Wall of Water with it. Once you cast a spell with this trait, you can’t cast that spell with it again until you finish a long rest. Charisma is your spellcasting ability for these spells.
Darkvision. You can see in dim light within 60 feet of you as if it were bright light and in darkness as if it were dim light. You can’t discern color in darkness, only shades of gray.
Emissary of the Sea. Aquatic beasts have an extraordinary affinity with your people. You can communicate simple ideas with beasts that can breathe water. They can understand the meaning of your words, though you have no special ability to understand them in return.
Guardians of the Depths. Adapted to even the most extreme ocean depths, you have resistance to cold damage.

Class features
Level 1: Sea Sorcery Soul of the Seal: At 1st level, your tie to the sea grants you the ability to breathe underwater, and you have a swim speed equal to your walking speed.
Curse of the Sea: When you choose this origin at 1st level, you learn the secret of infusing your spells with a watery curse.
When you hit a creature with a cantrip’s attack or when a creature fails a saving throw against your cantrip, you can curse the target until the end of your next turn or until you curse a different creature with this feature.
Once per turn when you cast a spell, you can trigger the curse if that spell deals cold or lightning damage to the cursed target or forces it to move. Doing so subjects the target to the appropriate additional effect below, and then the curse ends if the spell isn’t a cantrip (you choose the effect to use if more than one effect applies):
Cold Damage. If the affected target takes cold damage from your spell, the target’s speed is also reduced by 15 feet until the end of your next turn. If the spell already reduces the target’s speed, use whichever reduction is greater.
Lightning Damage. If the affected target takes lightning damage from your spell, the target takes additional lightning damage equal to your Charisma modifier.
Forced Movement. If the target is moved by your spell, increase the distance it is moved by 15 feet.
Level 2 :At 2nd level, you tap into a deep wellspring of magic within yourself. This wellspring is represented by sorcery points, which allow you to create a variety of magical effects.
Sorcery Points. (3) You have 2 sorcery points, and you gain more as you reach higher levels, as shown in the Sorcery Points column of the Sorcerer table. You can never have more sorcery points than shown on the table for your level. You regain all spent sorcery points when you finish a long rest.
Flexible Casting. You can use your sorcery points to gain additional spell slots, or sacrifice spell slots to gain additional sorcery points. You learn other ways to use your sorcery points as you reach higher levels.
Creating Spell Slots. You can transform unexpended sorcery points into one spell slot as a bonus action on your turn. The Creating Spell Slots table shows the cost of creating a spell slot of a given level. You can create spell slots no higher in level than 5th. Any spell slot you create with this feature vanishes when you finish a long rest.
Converting a Spell Slot to Sorcery Points. As a bonus action on your turn, you can expend one spell slot and gain a number of sorcery points equal to the slot's level.
Lvl1 - 2 points
Lvl2 - 3 points
Level 3 (in addition add subclass if one is available : xxx
Level 4 (Ability score or feat?):  xxx
etc.